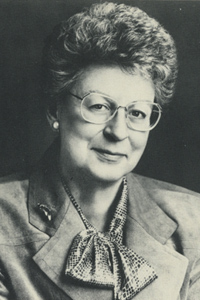 Dr. Rhoda M. Dorsey served Goucher faithfully for 40 years, beginning in 1954 as an assistant professor of history and concluding as its longest continuously serving president from the year 1974 through to her retirement in 1994. Known for presenting challenging coursework, teaching geography through a "blindfold test," and encouraging students both within the classroom and long after graduation, Dr. Dorsey was a beloved member of the Goucher community.

Sometimes remembered as the president who guided Goucher through the difficult transition to coeducation in 1986, she was named one of the 100 most effective college and university presidents in the United States a year later. A strong advocate for women's education and the liberal arts, she also served on a number of business and educational boards and committees.

Her dedication and service to Goucher did not end upon her retirement in 1994, and she was often called "the protector of Goucher's legacy." Dr. Dorsey spearheaded the effort to establish Goucher's Athletics Hall of Fame, served on its Committee of Visitors, volunteered in its archives, and was active in its Alumnae/i Weekend events and programming. She earned her bachelor's degree from Smith College and, on a Fulbright Fellowship, earned a second B.A. and a master's degree from Newnham College in Cambridge, England. She went on to receive a doctorate in history from the University of Minnesota.

The Rhoda M. Dorsey College Center, Goucher's central administrative complex, was named in her honor in 1994. After her death in May 2014, her ashes were interred in the Dorsey Center courtyard.