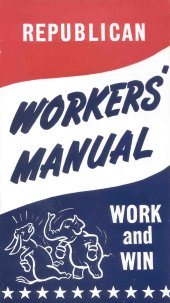 Since 1789, when cloth buttons were worn at George Washington’s inauguration, buttons, pins and other types of political Americana have been a way to show support for a candidate. These artifacts are a physical record of national campaigns, conventions, and elections of the past. The earliest items featured in this exhibit are ribbons from the Whig National Convention held in Baltimore in 1844 and an 1873 medalette of Ulysses S. Grant.

The earliest buttons in this exhibit are from the 1877 election of Rutherford B. Hayes and Samuel J. Tildon and the 1888 election of Grover Cleveland and Allen G. Thurman. These buttons are ferrotype or tintype, an early form of photography. Celluloid buttons were first made in 1888, but did not become popular until the 1896 election. In 1920, the lithograph process allowed for mass production of buttons.

Most of the artifacts in this exhibit are from the Brownlee Corrin Sands Collection and the C. I. Winslow Collection. Both Corrin and Winslow were professors at Goucher College, and their collections include significant records documenting national and local political activities of the 20th century.