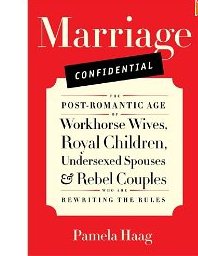 Tom gave up the brush and while . . . [his friend] Ben worked and sweated in the sun, the retired artist sat on a barrel in the shade close by. When the middle of the afternoon came, Tom . . . had had a nice, good, idle time all the while, . . . and the fence had three coats of white wash on it!

....Some spouses, certainly, do want more, and expect marriage to be more, not less. They still pursue the marital ambition, and the big dream. Almost by intuition, or perhaps deeply ingrained habit, they find ways through marriage to avoid "work that does not truly use [their] creative energy," as Friedan had hoped, but to melancholy, grumpy effect for their spouses. This is the story of how some modern Tom Sawyers get their fences whitewashed-by their wives.

Beth, one of my oldest friends, was something special among special women in our college because she turned down Yale, and no one did that. When she applied to graduate programs in the sciences after college she was admitted to all of the schools she had applied to, and she had a chance to turn down Yale a second time, which she did.

While Beth was in graduate school she met and married Richard, a fellow graduate student in the sciences. Rich is a charming and smart man, with big dreams. He's enjoyable to talk to, and he defies any easy categorization in his thinking or his beliefs. Beth had a baby earlier than they had planned, while she was still struggling to complete her Ph.D.

Beth weathered the usual ups and downs of motherhood as she simultaneously finished her dissertation research. The family lived in a small apartment in a midwestern city as Richard pursued an intellectually exciting but characteristically low-paying postdoctoral fellowship. I visited Beth a lot in the year after the birth, during which Beth continued to wear her black maternity clothes. She recalls today that she was depressed during this year. Tensions between the two over the division of chores simmered under the surface.

Since then, twelve years ago, they have moved every few years, often for Rich's dream career possibilities, once for Beth's. Consistently, she has ended up the workhorse wage earner for the couple. She disliked several of her lucrative but unsatisfying jobs ("I write reports to sit on bureaucrats' shelves"), but Richard always had more clarity and passion about his career dreams than Beth, and sought jobs that would provide interesting challenges. On one occasion he endeavored to start his own company; on another he took a poorly paid but satisfying job as an adjunct instructor; and on yet another, he worked as an athletic coach. Once he explored the possibility of abandoning his primary field to become a missionary, and took a part-time unpaid position in a church. In choosing among potential jobs, Rich has followed a muse. Beth has had to follow the dollar sign. Maybe each small decision along the way made sense to her, and to them, or seemed fair or temporarily expedient, but over time they had accumulated into a life that pinioned her to a soul-numbing rat race.

On one visit, several years ago, Beth was not in a good spot. Although I wish it were not so, her life had me perplexed. I tried to be supportive, but we have known each other for so long that my discomfort, which borders on a heartfelt frustration about her circumstances, must betray itself. Rich had just taken another poorly paid teaching job at a school three hours away, which meant he was gone several nights a week. This gambit had tied Beth to sole childcare responsibilities most of the week, as well as to a job that she loathes.

We are settled comfortably on her living room couch, in that ephemeral sweet spot of red wine intimacy between good friends, drunk enough for truth-telling but not yet so drunk that we take umbrage at it, when Beth says to me, almost in tears, "It would be nice to have a chance to be a real mother, before they're much older."

No matter how intimate or enduring the friendship, there is hardly a touchier domestic set of related topics among women than motherhood, parenting arrangements, and money. We trespass on this land-mined turf at great peril. Nevertheless, her wistful poignancy rouses me to uncommon courage and candor.

"Well . . . can't Richard be the wage earner for a while? Can't he support you so that you can take time off? It seems only fair." There. The elephant has been pointed at and named.

"I know, I'm frustrated being the big breadwinner here." She pauses to rip a chunk of bread off the baguette she has arrayed with the olives and cheese, and chews it aggressively.

And then, in addition to motherhood, I dare to bring up all the stray professional dreams she has shuffled since her undergraduate days. "Do you think maybe you can make a move for your job next? I can see you working with people in social work, or remember, you wanted to work with large animals?" I wince to think of how much this sounds like conversations I've had with the five-year-old girls on my street, all of whom want to be vets or princesses.

I am heard but there's no reaction. "Rich," she calls, "could you adjust that center light in the kitchen, over the counter? It's glaring too much out here."

I get the hint; the conversation wanders off.

Beth asks Rich to do the dinner dishes, which I take as a hopeful sign. It's a baby step toward the assertion of equilibrium in the dreariness quotient of their marriage. Richard does this task cheerfully, and my mood brightens. But he misreads the unfamiliar labels and uses dishwashing liquid instead of dishwasher liquid, and the dishwasher overflows with suds that spill out all over Beth's impeccably selected wood floors.

They laugh. Beth cleans up the mess. I help. Richard wanders off to do something or other-check his email for business leads, perhaps, or do Google searches.

Somehow, a daughter of feminism has become the melancholy heir apparent to the Man in the Gray Flannel Suit.

I'm surprised to learn that Beth's case isn't all that idiosyncratic or rare. In one out of three American marriages today (33 percent), women out-earn their husbands, an increase from one in four (24 percent) in 1987. That 33 percent encompasses a variety of marriages. Certainly, it contains symbiotic, or at least benign, modern marriages in which a stay-at-home dad does the heavy lifting of parenthood and housework, while the wife pursues a more or less satisfying career, and both feel that the arrangement works and makes them happy.

I emphatically see that arrangement as among the most unalloyed feminist success stories of our time, because the husband and wife really do transcend gender roles and operate according to their own needs, predilections, and preferences. Also to be found in that 33 percent are some of those famously beleaguered dual-career marriages where the wife may nominally out-earn the husband but both work basically the same hours, for basically the same salary, in jobs they both basically like or basically despise. These couples have a grim, exhausting parity to them-their dreariness quotient balances out. There are breadwinner women among the 33 percent, too, women who find their careers soulfully satisfying and wouldn't give them up for the world. (I chatted with one of these happy breadwinners when I saw her doing a rare drop-off at my son's kindergarten one day. "When do they open the classroom doors?" she kept asking me anxiously, eager to imbibe the sacred air of her corner office again. Her husband stays at home to care for the children, and they are both satisfied with the arrangement.)

But nestled within those one in three marriages is a more troubling subset that includes some of my disgruntled friends, women who are highly educated, successful, ambitious, and talented, and who inhabit low-conflict melancholy marriages today, but for distinctly modern reasons. Most of them finished college and blazed through prestigious professional and graduate programs in the late 1980s and early 1990s. They are lawyers, scientific researchers, academics, editors, and entrepreneurs.

And now they are wives who work in demanding, high-powered careers for which they have little passion or affection, financially supporting husbands who are following their own creative, artistic, avocational, or intellectual muses.

If Tom Sawyer married, this might be his life....