Since 2015, the Marguerite Barland ’60 Merit Award has been presented annually in honor and celebration of our first African American graduate, Marguerite Barland. This annual award celebrates one or more alumnae/i who in her or his professional and private life has significantly contributed to the diversity of our campus community through leadership—as a mentor, role model, volunteer, or philanthropic supporter of the college. Throughout their life, this individual will have exemplified Goucher’s Community Principles—respect, inclusion, communication, service and social justice, and responsibility—and by doing so, they will have enhanced and inspired our community.

Logan S. Herring Sr. '04 was honored on February 18 at the annual Jewell Robinson Dinner for his work eliminating barriers of structural racism and transforming teen engagement in the Riverside neighborhood of Wilmington, Delaware. 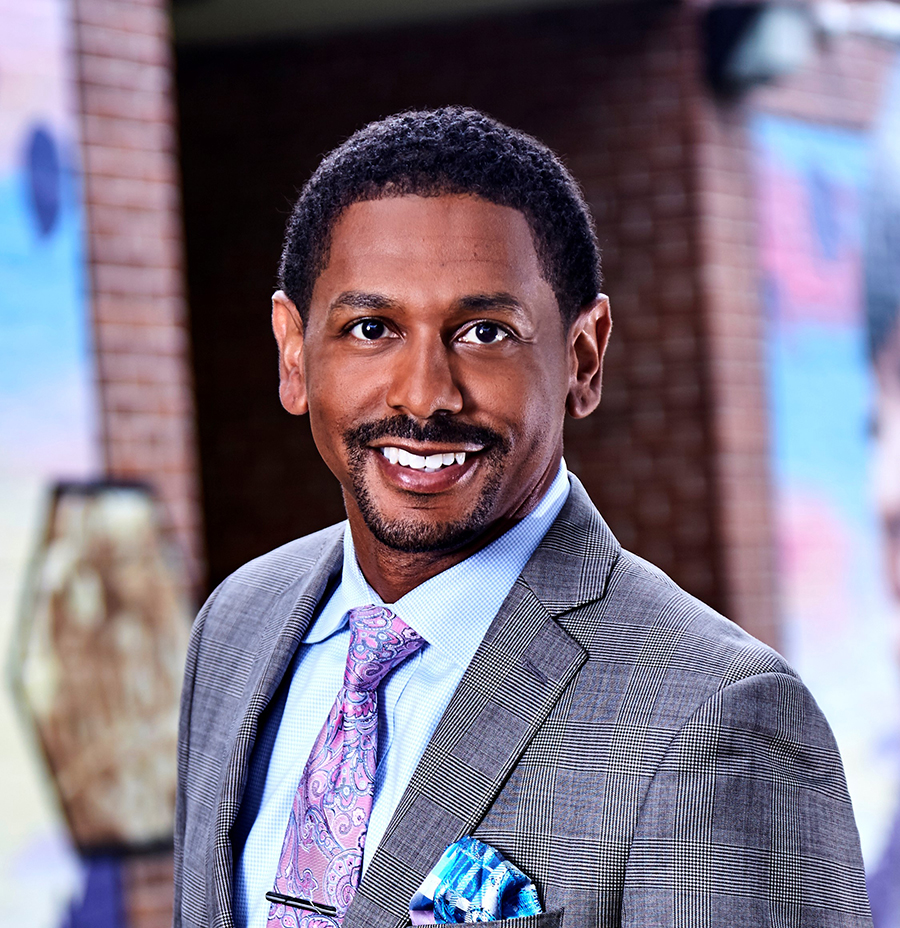 Goucher College is proud to honor Logan S. Herring Sr., Class of 2004, with the 2022 Marguerite Barland ’60 Merit Award. Logan has had incredible success in helping the young people of Wilmington, Delaware, as well as in transforming the neighborhoods in which they live.

In 2016, Logan reached a pivotal moment. At that time, he had a job at the Boys & Girls Club in Delaware with statewide responsibilities. Then, he was asked to take over the local Kingswood Community Center, which was in dire shape and in danger of closing. Logan knew it was a risk to leave his job, where he was already making an impact in many communities. But he had a vision for his city and its people, and he knew things could change.

Logan took that risk and successfully turned around Kingswood, which now serves the young and old alike, including through an early learning academy, before and after care, and a senior center. Logan expanded the work, as well: He created The Warehouse, a co-working facility and network for teen-serving organizations, and REACH Riverside, a nonprofit community development corporation dedicated to improving the Riverside neighborhood. Today, Logan is the CEO of The WRK Group, an affectionate name for the three organizations collectively. In 2021, The WRK Group raised a total of $48 million.

Part of Logan’s success comes from his mission to empower young people. At The Warehouse, where all the local groups providing services to teenagers have been brought together, Logan hired teens to be involved in every step, from picking furniture to choosing programming. They even created something called “The Shade Room,” where the teens can take a facilitator to task if the programming hasn’t met their expectations.

Empowering young people is important to Logan because he himself was an empowered young man. As a student at Goucher College, Logan played soccer and basketball and became the captain of both teams. He credits his coaches with having pushed him to excel. At The WRK Group, community is the core value. Logan approaches funding and the work of the organizations with a “Thanksgiving Model,” where each person brings their best dish to the table and everyone shares. For Logan, it’s all about giving people the opportunity to be empowered, and Logan has done that again and again.

In 2021, Logan was recognized as a Most Influential Delawarean by Delaware Online, he was named CEO of the Year for Large Nonprofits by Delaware Business Times, and he was inducted into the Delaware Business Leaders Hall of Fame. Logan also received the Lieutenant Governor’s Wellness Leadership Award for innovation in the workplace by addressing staff ’s mental health and well-being, and he was recognized by Action for Delaware’s Children for outstanding work on behalf of children in Delaware.

It is with gratitude and with great respect for his accomplishments, his dedication to his community, the belief he has in others, and the vision he brings for the future, that we are proud to recognize Logan S. Herring Sr. with the 2022 Marguerite Barland ’60 Merit Award.

Herring was honored at the 16th annual Jewell Robinson Dinner on Friday, February 18, 2022.