The CMS program awards several honors each year to our students, in memory of former students, faculty, and families of students. 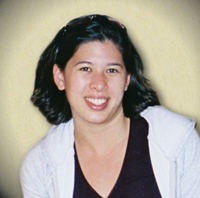 Each year the Communication and Media Studies Department honors a graduating senior and two rising sophomore or junior majors during the annual spring convocation ceremony. These awards are generously funded by David and Irene Pankey in memory of their beloved daughter Erin Felarca, class of 2005. During her four years at Goucher, Erin was honored with several awards. In 2001, she received the Marvin Perry Award. Erin graduated with department and college honors. She received the department's award for academic excellence in 2005 and she was also a Phi Beta Kappa inductee. Her senior thesis, "White or Something Like It: The Self-Proclaimed All-American Hapa Haole as the Cure for Racism," adroitly examines the post 1960's mixed race movement, specifically the rhetoric surrounding the half-white, half-Asian demographic. Erin's astute analysis of contemporary multiracialism posits a new racism based on the continued normative model of whiteness that guides our racialized discourse on miscegenation and the rhetorical posturing on multiculturalism not replicated in lived experience.

Erin was passionate about travel abroad and multicultural experience. She was committed to investigating and understanding issues of diversity and social justice. She was a talented musician, a gifted athlete, and a good friend who cared deeply about people in general and, especially, those in need. She wrote for the Quindecim and produced radio programming for the campus station. Her essay, "Female Body Builders: The Ultimate Feminists?" was published in the first edition of Goucher's student journal The Verge.

Erin's love of learning, her high academic achievements, her ability to synthesize and organize complex ideas, and her grace and dignity will long be cherished by the faculty of the department. We are honored to remember Erin each year as we choose students for the following awards:

The Erin Felarca Memorial Academic Achievement Award is given to a graduating senior from the Communication and Media Studies Department who has demonstrated excellence in academics and a commitment to issues of diversity.

The Erin Felarca Memorial Award for Travel Abroad, based on both financial need and merit, is given to a student majoring in Communication and Media Studies in their sophomore or junior years who is planning a study abroad trip for the following year. The award is intended to help finance an ICA or a semester abroad.

In Honor of Brownlee Sands Corwin

Awarded to a Communication major in honor of the founding professor of Communication
and Media Studies at Goucher College.

Awarded to a Communication and Media Studies major in their sophomore or junior year at Goucher College.