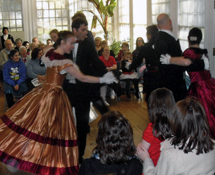 As guest artists, Chorégraphie Antique has also performed with One New York Baroque Company in New York City, the English Folk Song and Dance Society in London, and at the University of Limerick in Ireland.