How did our forefathers have fun? 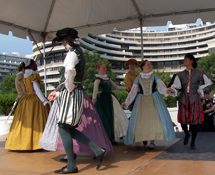 All of these vintage dances have been researched and reconstructed from dancing manuals and music by Chrystelle Trump Bond, professor emerita of dance and founding chair of the dance department at Goucher College.

Chorégraphie Antique has performed at:

As guest artists, Chorégraphie Antique has also performed with One New York Baroque Company in New York City, the English Folk Song and Dance Society in London, and at the University of Limerick in Ireland.