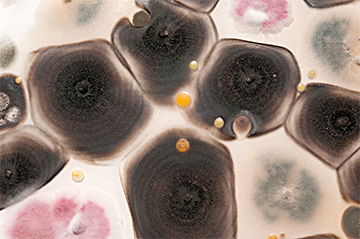 Under the Scope will be presented at Goucher College's Silber Art Gallery in the Sandy J. Unger Athenaeum from October 25, through December 4, 2016. This exhibit, which is free, open to the public, and accessible to all, can be viewed Tuesday through Sunday from 11 a.m. to 4 p.m.

Under the Scope is an exhibition of works by seven contemporary artists whom each explore different methodologies and aspects of science. Through sculpture, installation, painting, printmaking, performance, photography, and video, the artists probe beneath the surface of things, often diving into the depths of the microscopic world.

Artists featured in Under the Scope:

Benjamin Andrew is an interdisciplinary artist exploring the frontiers of storytelling and technology. Born in Ithaca, New York, he studied art at Pratt Institute in Brooklyn, NY, and the Maryland Institute College of Art in Baltimore, where he received his M.F.A. from the Mount Royal School of Art in 2013. After working and teaching in Baltimore for several years, he recently relocated to State College, Pennsylvania, where he is involved in several interdisciplinary teaching projects. His writing has appeared in Bmore Art and What Weekly; his artwork has been featured throughout Baltimore, Washington, DC, and New York, including public art projects in Arlington, Virginia, and the Foggy Bottom Sculpture Biennial in Washington, DC.

Selin Balci received her B.Sc. from Istanbul University, B.F.A. from West Virginia University, and M.F.A. from University of Maryland. Balci's many accolades include the prestigious College Art Association (CAA) 2012 Professional-Development Fellowship, So-Hamiltonian Fellowship in Washington, DC, 2013-15 Bethesda Urban Partnership's Trawick Prize Finalist Award, and Smack Mellon's Hot Picks Artist Award. Numerous galleries have mounted solo and group exhibitions of Balci's work including the Hamiltonian Gallery, DCAC (District of Columbia Arts Center), WPA (Washington Project for the Arts), ConnerSmith Gallery, Honfleur Gallery in Washington, DC, Rush Arts Gallery and Smack Mellon in NY. Balci explores the theater of conflicts, dominance, and predation in a cultivated, living environment: the Petri dish. The environment serves not only as a vivarium for mold, bacteria, and fungus but also as a living studio. By constructing a landscape simultaneously natural and artificial, Petri dish provides a platform on which she acts as a curator and creator.

Elizabeth Crisman was born and raised in Virginia and has lived in the Washington, DC, area for most of her life. She received a B.F.A. in Ceramics from Virginia Commonwealth University in Richmond, VA, and an M.F.A. in Photography and Digital Imaging from Maryland Institute College of Art in Baltimore.

Crisman has exhibited nationally in group and solo exhibitions including Baltimore, Philadelphia, and Brooklyn, NY. She was a fellow in various programs, including the Center for Emerging Visual Artists in Philadelphia, Vermont Studio Center, and the Virginia Center for the Creative Arts in Amherst, VA. She has been a recipient of various grants such as the Maryland State Arts Council Grant and the Alumni Travel Grant from the Center for Emerging Visual Artist, which allowed her to travel to Israel for a month to volunteer on an archaeological excavation at Kfar Hahoresh, east of Nazareth in Israel. This experience continues to inform her artwork. Most recently, she was a fellow at Le Moulin à Nef, (VCCA), in Auvillar, France. She collaborated with Baltimore writer Jen Michalski in a narrative collaboration utilizing photographs and writings that were recently published in the LA-based online publication PairShaped.org. Crisman had been an adjunct professor of photography and art history for ten years at various Baltimore- and DC-area colleges, but is now the Technical Director at the Montpelier Arts Center in Laurel, MD.

Lauren Kalman has a diverse cross-disciplinary practice that is rooted in jewelry and metalsmithing. She utilizes traditional jewelry/metalsmithing, garment construction, and sculpture techniques combined with digital photography, performance, installation, robotics, and video. Through her practice, she investigates historical, political, and social contexts relating to sex, gender, power, pleasure, pain, taste, and beauty. In her work, skin markings have been presented as jeweled infections, fabric growths, or wearable devices.

A. Gray Lamb is an emerging installation artist focused on the relationship between museums and belief. She graduated from the Maryland Institute College of Art in 2014 with a B.F.A. in general fine arts. Since then she has been working to expand her New Institute of Historical Cosmological Exploration project, parts of which have been exhibited in various places including the Arlington Arts Center and Washington Project for the Arts. Recently she was an anchor project artist for Artscape 2016, Space: Explore What's Out There, as well as a member of their Space Advisory Committee. In her spare time she travels to places with unique landscapes, star gazes, and plays with her cat, Neptune.

Nicole Shiflet was born in Wisconsin, grew up in Georgia, and, for the last thirteen years, has called Baltimore home. Her mediums of choice are drawing, painting, installation, and 2D animation. She has shown her work nationally and internationally. Her interests include animals, the intersection of science and art, food, and organizing things. In her free time she works as a patent examiner.

Kathy Strauss is a working artist, scientist, and mother. She, her husband, and son live in Baltimore. She earned her degree in art from Westminster College (Pennsylvania) with concentrations in biology and mathematics, and has been making and exhibiting both fiber art and works on paper for over 30 years. She has shown work in many Baltimore area venues including Maryland Art Place, the Creative Alliance, and at Baltimore's annual arts festival ArtScape, as well as exhibiting in Pittsburgh, Washington, DC, and New York. Her work has been included in textbooks (Gateways to Art, Understanding the Visual Arts) and publications (Link: A Critical Journal on the Arts in Baltimore and the World), and is in permanent collections, (including Institute for Genome Sciences and Notre Dame of Maryland University, both in Baltimore). She has worked with the staff at the Baltimore Museum of Art in Baltimore, and the Textile Museum in Washington, DC, demonstrating and lecturing on fiber art techniques.

Strauss' work in the sciences has influenced and informed her art making. Initially inspired by imagery of the sciences, the systems and integrations of chemistry and mathematics also found their way into her fiber art and works on paper. Strauss currently works at University of Maryland Medical School, Division of Malaria Research. She previously worked in UMMS Department of Epidemiology, where the research on the Vibrio cholerae bacterial capsule that is shown in Search was done.