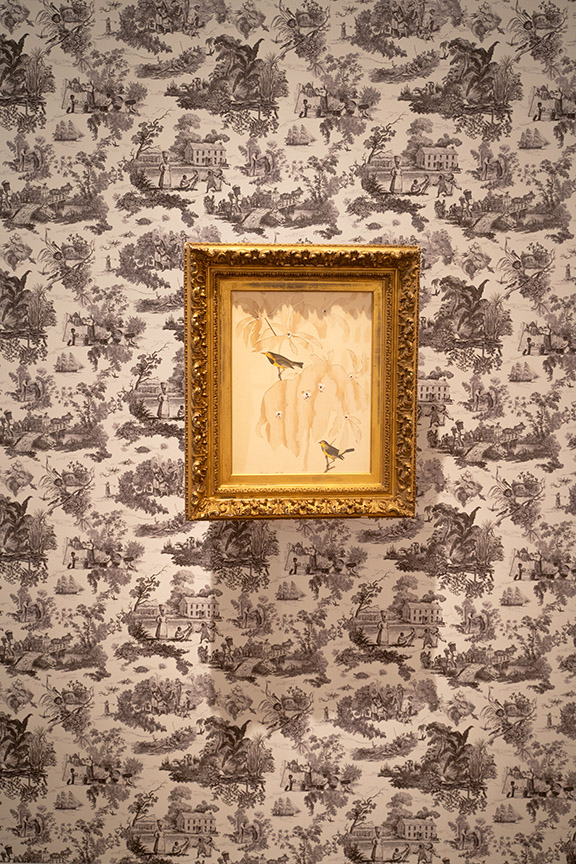 Rediscovering Goucher’s Lost Museum reconstitutes the remnants of the former Museum of the Woman’s College of Baltimore, a universal collection of Natural History, Art, and Ethnography assembled in the late-19th century.  The show, supported by a National Endowment for the Humanities grant, explores the history and legacy of Goucher’s historic Museum and the power of exhibition as an agent of storytelling. A collaboration among faculty, staff, and students, the exhibition considers the shifting practices and ethics of collecting, and diverse narrative strategies for telling the complicated history of objects.   Goucher’s Lost Museum features storied artifacts and specimens; facsimiles; fictions; speculations; and the artistic contribution of contemporary artists whose work addresses ethical and archival gaps in museum and field research practices. 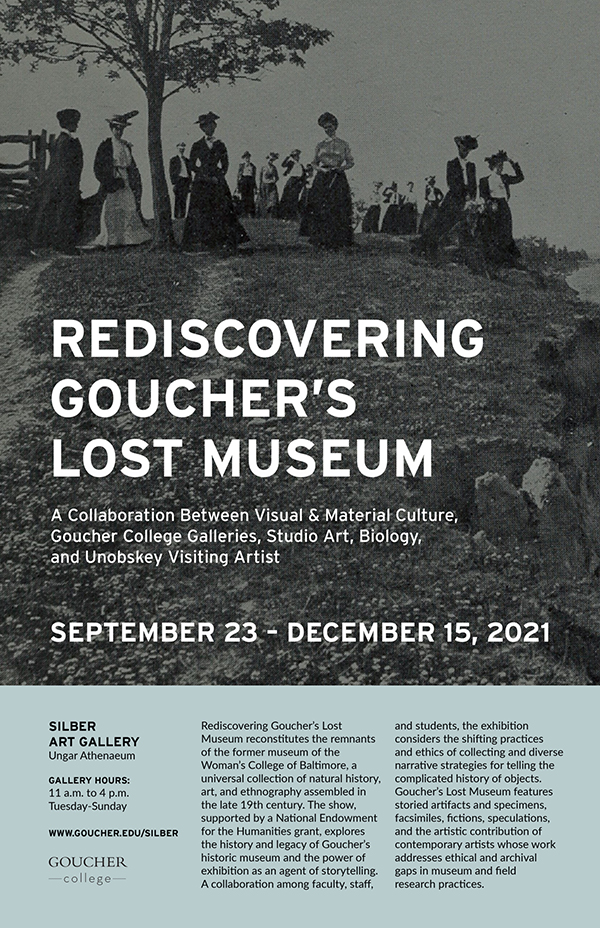 Rediscovering Goucher’s Lost Museum is an exhibition that has encouraged a large-scale collaboration among multiple departments at the college.  Drawing inspiration from Steven Lubar’s The Lost Museum at Brown University, the exhibition highlights student and faculty research into the former Museum of the Woman’s College of Baltimore that was once nationally prominent.  Supported by a National Endowment for the Humanities grant and the opportunity to work with Mark Dion as a visiting artist in Spring and Summer of 2021, the show retells a complicated history of 19th-century museum practices; gives voice to marginalized communities and cultures; and explores shifting perspectives on the display of artifacts and specimens in the 21st century museum.  Pieces from the original museum collection are interspersed with a student-designed diorama and Wunderkammer, and contemporary artworks by Jackie Milad, Kaitlin Murphy and Katie Wolfe.

Baltimore-based artist Jackie Milad confronts the prevalence of ancient Egyptian objects of cultural heritage and human remains that have been collected and presented by Western museums and academic institutions under previously accepted historical norms that today we acknowledge as inappropriate.

Her installation consists of three pieces titled “Stolen” (largest) and “1/350 27” (two suspended pieces). The titles locate Goucher’s Egyptian artifacts as one collection among 350 in 27 countries.

Kaitlin Murphy’s work draws parallels between the omissions of credit and acknowledgement of collaborators by John James Audubon to field research conducted in the early days of the Woman’s College. Completion of Audubon’s work hinged on the voluntary labor of a talented female artist, and the systemic structures that supported the interests of white men, including the labor of enslaved people. The leger of Goucher’s (WCB’s) former museum similarly credits fossil specimens to the class of a male professor, rather than the female student who made the discovery.

Katie Wolfe presents a number of 3D printed scans of classical sculptures and teaching aids used at MICA for figure sculpture, as well as those made available through museums and open sources file sharing platforms. As the traditional methods of casting were phased out of the MICA curriculum, many of the institution’s sculptures were lost to damage or neglect.  Katie’s work illustrates the precarity of institutional collections and their reliance on limited members of the faculty to incorporate them into learning.  Goucher’s classical sculptures, documented in their downtown campus and images of art classes, did not make the trip to the county campus, and there is no record of where they went.