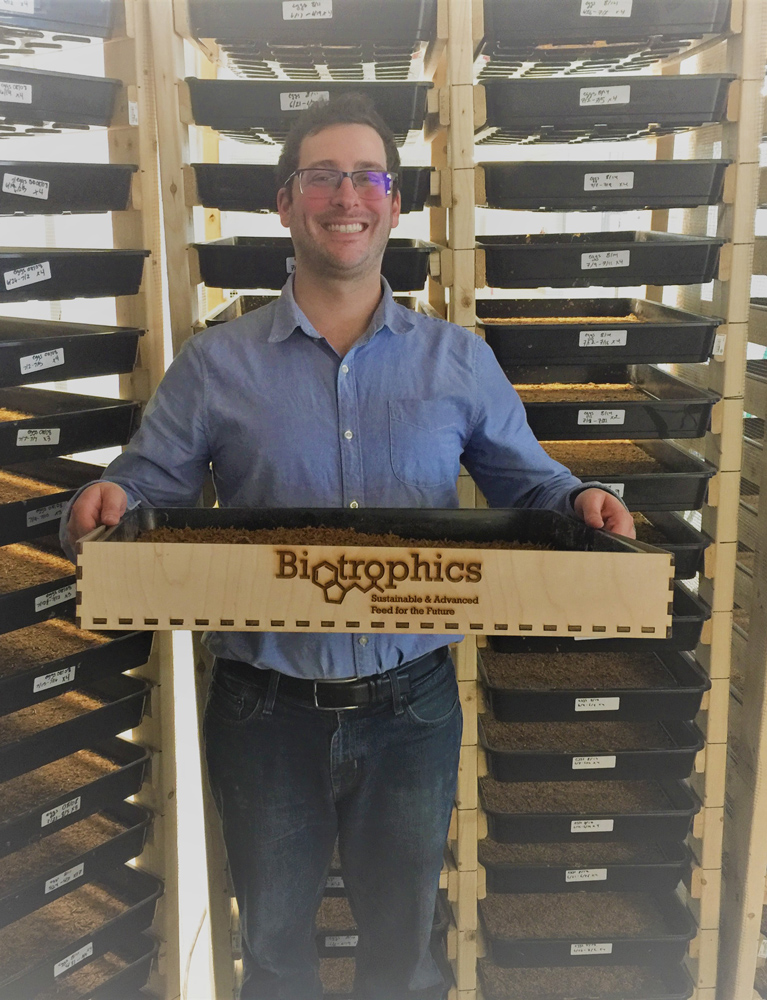 Some people like to go their own way. Some of these people might be building an animal feed startup, while others might use genetic engineering to create insects with higher protein content. Sometimes, these are even the same person. Meet Sam Glickstein ’12.

Glickstein chose Goucher for its small class sizes and its Biological Sciences Program; he knew the college had a strong premedical program, and he figured that spoke well of the science majors, too. After seeing the campus, the decision was easy.

He made good use of those four years. With a concentration in environmental science, Glickstein was already interested in intensive agriculture when he and some friends got the chance to build a prototype of a hydroponic system (now fully operational) in Goucher’s greenhouse.

“After that,” said Glickstein, “I was interested in aquaculture, and that’s how I got into insects. They’re being investigated as a very good alternative to fishmeal.”

Fishmeal is ground-up dried fish, used either in animal feed or as fertilizer. But Glickstein points out that many fisheries are at capacity—there are not enough fish left in the ocean.

With or without fish, livestock need to eat. Many companies are starting to experiment with and adopt alternatives, using replacements like algae or plants.

“The problem with plants is that they are cheap, but they’re limited in some of the amino acids they have,” said Glickstein. “I did some research and realized that one of the alternatives being explored was insects.”

He couldn’t find a lot of the information he was looking for. “The conversation even two years ago was much less than it is now,” he said. “This has become a hot industry, believe it or not.”

And yet, Glickstein’s startup, Biotrophics, is still one of the only companies in the country attempting mealworm farming on a massive scale. He and two partners rent office space in a warehouse in downtown Baltimore, growing mealworms in great stacks of bins that line two walls. Mealworms are the larvae of the darking beetle and are what will be used in the animal feed; they have a higher fat content and less chitin or exoskeleton than the adults do.

Glickstein’s setup includes the rows of mealworms, as well as bins for pupa and adult beetles kept for breeding. He offers visitors bags of frass, or insect poop, which is a great fertilizer. (One Goucher office has been using it on its plants, to good effect.)

Glickstein has big plans for his little larvae. Even mealworms can’t match fishmeal in its nutritional profile, so when he’s able to scale the startup, he and his partners plan to focus on licensing out strains of insects that have up to 30 percent more protein than other insects on the market. “We have developed a method to engineer the insects to have higher protein content and be the first on the market to fully replace fishmeal,” Glickstein said.

He also wants to work with CRISPR genetic modification technology to “make this a truly viable sustainable protein,” with beetle strains that are faster growing, have better rates of breeding, and have lower feed-conversion ratios (that is, eat less but mature at the same rate).

He has so many more ideas for what he could do with the technology and with the mealworms. It’s a lot to consider. For Glickstein, though, that’s a feature, not a bug.