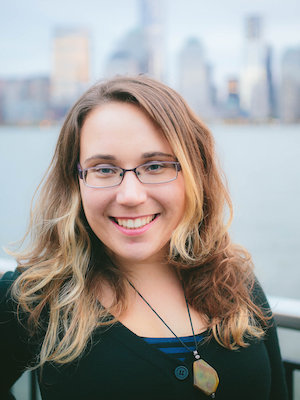 It’s Monday, so Melissa Leah Weiss ’09 is at home. “I work at a show that airs Sunday night,” she explains, “and it’s live to tape, so we work weekends.”

If you are one of the millions of viewers of HBO’s Last Week Tonight, starring comedian John Oliver, you were probably already aware of when it airs, but Weiss, the junior editor on the program, is still getting used to the idea of working on such a high-profile show.

“I try not to talk about it too much because I don’t want to brag,” she says, laughing. “But when I’m with my husband, he’s always like, ‘No, tell them what you work on!’ It’s almost embarrassing at this point.”

It’s an embarrassment she seems willing to live with, and a long way from the sinking feeling she felt back in 2009, when the recession hit in earnest just as she was about to enter the job market.

“We were sitting in one of the common rooms at Goucher, watching The Daily Show,” she recalls, “and they were reporting that all these auto dealerships were being put out of business, and the housing market was crashing, and we’re sitting there going, ‘Oh my God, we’re graduating in six months. What are we going to do?’”

What she did was move home to Rhode Island. After a brief, but soul-killing stint taking school portraits for a national chain (“Photography is one of my passions, and just being sucked into this McDonalds of photography was awful.”), she scoured the Internet, found an internship in New York with a production company she’d never heard of and relocated to nearby Jersey City.

When she moved to New Jersey, it was with a couple of fellow alums, and at one point seven Goucher grads lived on the same street there. “It was very sitcom-y,” she says. One of those grads was Alex Doyle ’09, a high school teacher and playwright whom Weiss married in 2014. The pair formed a theater company — the Box Colony Theater — with other alums, and they’ve been featured at the New York International Fringe Festival.

Weiss’ first internship lasted two months, after which, she says, “I spent the next five months skipping from one low-paying temporary gig to another, editing kosher recipe videos for someone’s blog, or editing a root canal video for an endodontist’s website — all these crazy, weird little gigs that paid next to no money.”

Between jobs that paid next to nothing, she volunteered for shoots that actually paid nothing. Any film student who posted a Craigslist ad looking for someone to set up lights, go on meal runs, or anything really, got a call from Weiss. “Just anything that I could do to meet other individuals who wanted to work in television, hoping that eventually it would lead to my first break,” she says.

Her hustling paid off when the second camera-person she met helping out on a never-released web series wrangled a job as a production secretary at a company working on reality shows. A month later, Weiss worked her connection, got an interview there, and was hired. She spent two-and-half years learning everything she could about all aspects of the television business. “That was the start of my career,” she says. “It took a while, but it worked.”

After a few years as an assistant editor for reality TV shows and a Ken Burns cancer documentary for PBS, Weiss went to work on an MTV talk show (Nikki & Sara Live) before making a jump to Comedy Central’s Comedy Underground with Dave Attell, then to Last Week Tonight.

Of her current job, she says, “Last Week Tonight is an amazing show. Every day I get to interact with people who are just genuinely hilarious, but also insanely smart.”

She adds, “I don’t mind that I didn’t go to film school because I got to take everything else that Goucher offered. I took a ton of theater classes; I took all their directing courses; I took photography courses, English courses, women’s studies. I mean, I did a ton. If I’d gone to film school, I probably would have just studied film, and I’d probably be a little more narrow-minded than I am now.”