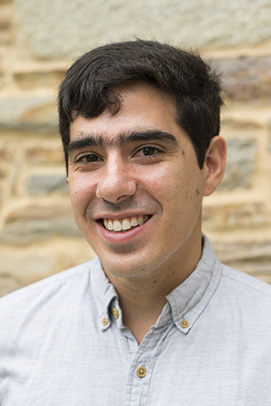 “We demystify technology so it’s more approachable for artists,” says Bernstein, one of the several professors across campus utilizing Goucher’s makerspace, a hub of creativity and innovation currently located in the Julia Rogers building.

During the Fall 2017 semester, Bernstein, along with Assistant Professor of Mathematics and Computer Science Phong Le, worked with students to build a CNC router, a computer-controlled cutting machine used in the digital fabrication process. Bernstein says that letting students “drive the CNC assembly” process was an important part of empowering students to take ownership over the space.

Supported in part by the Greater Goucher Fund, the makerspace also houses the Fred Warden 3-D printer, several Raspberry Pi and Arduino microcontrollers used to program robots, and a sewing machine with conductive thread and fabric so students can make wearable technology garments.

“Students have access to equipment they wouldn’t otherwise have access to,” says Bernstein, who meets with students once a week in the makerspace.

Students in the digital arts and art & technology master’s programs are drawn from a variety of artistic backgrounds, and Bernstein encourages students to work in teams to draw from their collective creativity.

“Most people can’t be an expert in all things,” says Bernstein. “The program really equips our graduates to work in whatever fields they want. It’s liberal arts within technology.”

Bernstein says he is a good example of the diverse possibilities of a digital arts graduate degree.

Bernstein is delighted to be back at Goucher and working with the next generation of digital artists.

“I found my people here and I stuck around,” he says. “I’m excited about the future.”