The book as art

When books talk, April Oettinger’s students listen to the secrets they whisper. 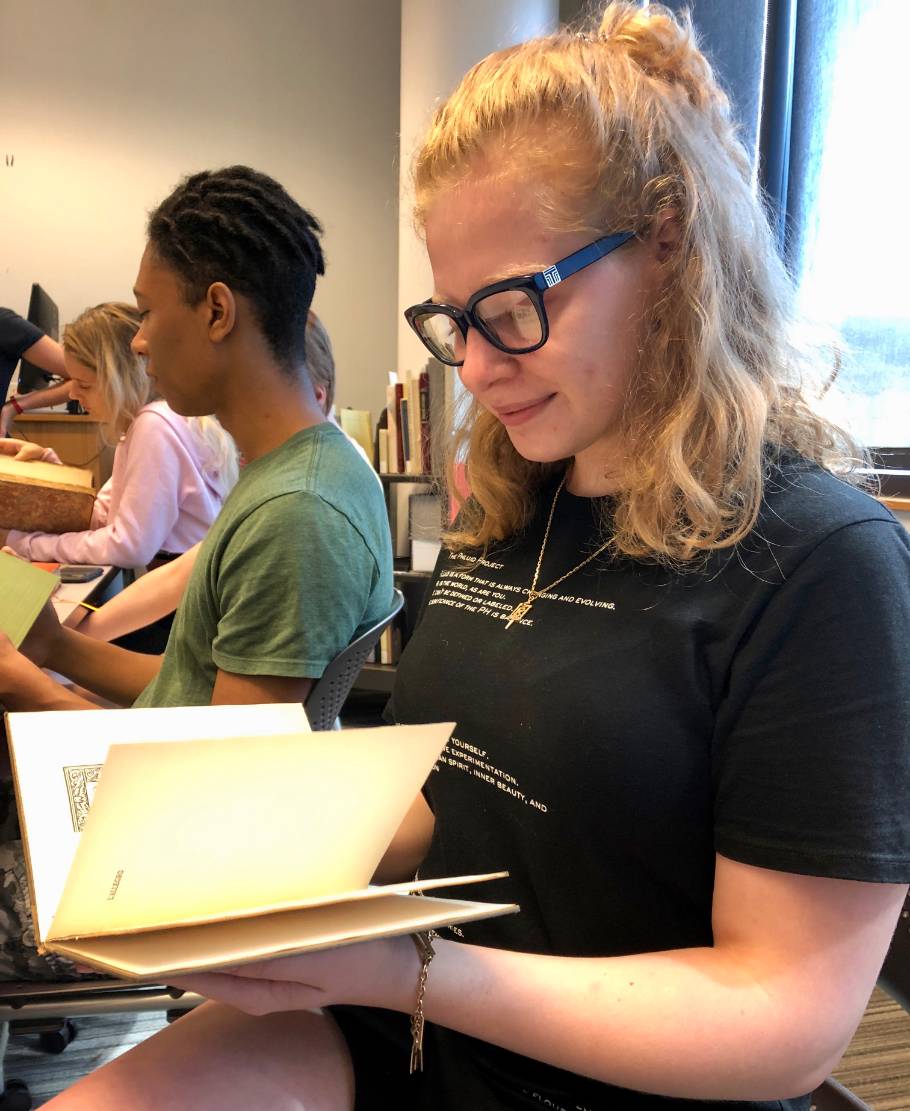 This past fall, the students of Book Studies 383: The Art and History of the Book, a class taught by Associate Professor April Oettinger, examined fine press books from Goucher’s Special Collections and Archives (SC&A). With guidance from Oettinger and Tara Olivero, the curator of SC&A, students from Book Studies crafted an exhibit featuring books they researched.

“The Book As Art: Fine Press Books in the Goucher College Library” will be open January 29 through March 17 on the fourth floor of Ungar Athenaeum outside of Special Collections. The opening reception is 6 to 8 p.m. Thursday, February 7, and all are welcome. The Betty (Applestein) ’52 and Edgar Sweren Book Studies Fund made the exhibition possible, Oettinger said.

Jaime Hartman ’21, one of Oettinger’s students, said she and her peers researched the owners of the books, the printing presses where they were produced, the cover designs, the illustrations, and even the font.

“With a book exhibit, we’re not necessarily looking at the text. We’re looking at how it’s presented to people the same way you would look at a piece of art. How did its time, its people, its place shape the design?” Hartman asked. The fine press books came from the Arts and Crafts movement during the 19th and 20th centuries, which was a push against industrialized objects that lack character, Hartman said. Instead, presses created small batches of handcrafted and artfully detailed books.

This is the first time Oettinger has incorporated a student-curated exhibit into a class, but it won’t be the last. The exhibit is a precursor for a new major, visual and material culture, or VMC, which Oettinger helped create in collaboration with Tina Sheller, assistant professor of historic preservation. The VMC major examines all human-made structures and objects as art that helps shape history and society. It will replace the art history major in Fall 2019, but students will still be able to minor in art history and historic preservation.

“The fine press exhibition is actually a pilot for what we hope will become student-curated exhibitions from Goucher's unexplored, 3,000-piece Art and Artifact Collection,” Oettinger said. “This collection is another hidden treasure of Goucher, and there is enough to keep generations of students busy. It has not been on display since Goucher College was downtown, roughly a century ago.”

Of Goucher’s many gems, Hartman selected “L'Allegro and Il Penseroso,” paired poems written by John Milton and owned by Robert Garrett, of the B&O Railroad family. Hartman especially loved learning that Garrett was an 1896 Olympic gold medalist for discus and shot put, but she discovered even more from the book itself, gleaning everything she could from the woodcut illustrations and hand-pressed text. Like the rest of her classmates, she created a website to highlight her findings.

“It really is about a book being a piece of art, but it’s about a piece of art that should be shared,” Hartman said. “We’re taught in the Art History Program—especially now that it’s going to be VMC—everything that is made by human hand or is designed is worthy of study, which is a 21st-century idea of what is art and what can be deemed art.”