Goucher students and alumnae/i remember Ruby Johnson, who was a member of the campus community for nearly 10 years. 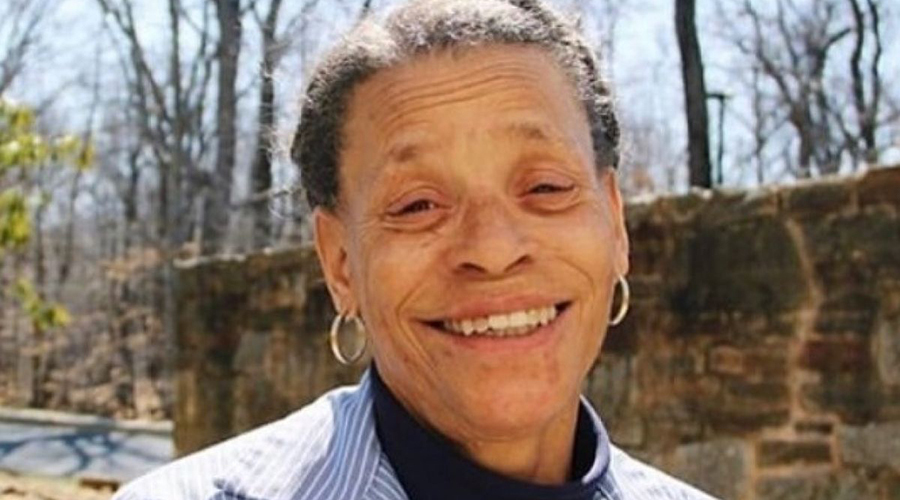 Ruby Johnson greeted everyone she knew at Goucher with a friendly, “Hey baby, how you doin’?” It’s how the Goucher community will remember Johnson—always smiling, often teasing, and sometimes scolding students like family. Johnson died May 15, 2020, a loss felt deeply on campus and beyond.

To students, faculty, and staff, she was Ruby or Ms. Ruby. The Goucher community knew her as a vibrant and straightforward person. There wasn’t one story, one joke, or one piece of advice that made Johnson the person everyone loved, says Emma Halterman ’19, which is why she wanted her fellow Goucher students to honor Johnson together. Halterman reached out to Johnson’s family to create a GoFundMe account for her funeral expenses. In several weeks, the community raised $6,200, surpassing the goal of $5,000. Additionally, many students attended Johnson’s memorial service and wrote notes about Johnson on the GoFundMe page.

“She was like having your own personal aunt on campus who would check on you whenever she saw you,” says Cydnii Jones ’19. “And being a Black student on a mostly White campus, I didn’t see a lot of people who reminded me of home. Ms. Ruby was that piece of home for me and a lot of my friends on campus.”

Jones adds that the cleaning staff, who are disproportionally Black and Brown compared to the rest of the campus, gave Jones a sense of community. “It’s good to see that representation, no matter how small,” Jones says. “It just makes you feel like you’re not alone and that somebody like you sees you and understands you.”

For Nadiera Young ’12, Johnson was always there to remind her why she was at Goucher in the first place. “She was like a little motivational speaker on your way to class,” says Young. “But she was also real, you know? She told you how it was. But everything she said was always filled with love.”

“‘How are y’all today,” Ms. Ruby would always ask, and sometimes, Young says, she just needed to tell someone about her day, “like a mom away from home.” Then they’d be laughing, and she’d realize, “Oh, that just made me feel good, that was a great moment in my day.”

When Johnson asked how you were, you knew she wanted the real answer and not a generic response, says Adam Jones ’20 (no relation to Cydnii). He struggled with a personal matter in his senior year, and he started talking about it with Johnson. She told him to call his family because they knew him better than anyone else did. Of course, he listened to her advice, and it worked.

“She was just there for me, and it was always at the most random times,” he says. He would start talking with Johnson, and her kindness and advice would be exactly what he needed.

Sometimes, what Cydnii Jones needed was a good laugh. That’s what she/they remembers most, just laughing at Johnson’s jokes. She would call out Jones and her friends for messing around in the hallways, always assuming they were up to something, which wasn’t too far from the truth.

Johnson was always telling Jones’ friend to fix her hair, calling her “crazy girl,” Jones says, laughing at the memory. Halterman also remembers Johnson scolding her and her friends, usually for not wearing shoes in the hallway.

“I really do think that she made it a part of her mission to do the hard work with people and really just love on people and encourage them,” Young says. “Even if it was something small, like a ‘hello’ or ‘how are you doing,’ she just made sure that you as a person, as a student, felt like you mattered. That was Ms. Ruby.”