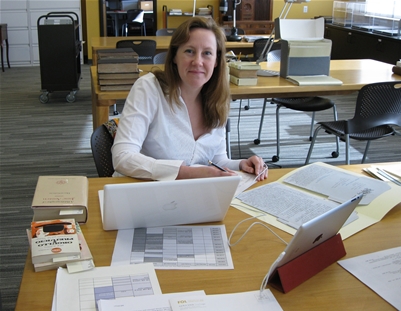 Hear a podcast of the lecture.

Goucher's Henry and Alberta Burke '28 Jane Austen Scholar-in-Residence Gillian Dow explored  the effect of quintessential "Englishness" on the translation of Austen's works into other languages and cultures during her talk, "Translating Austen; or When Jane Goes Abroad," on Tuesday, February 7 in Buchner Hall of the Alumnae/i House.

As associate professor and lecturer of English literature at the University of Southampton in the United Kingdom, Dow has extensively lectured and published about Austen and her works. Two of Dow's upcoming publishing projects concern Austen's writings in translation, how the author's language is constructed by her translators, and the global reception of her adapted works.