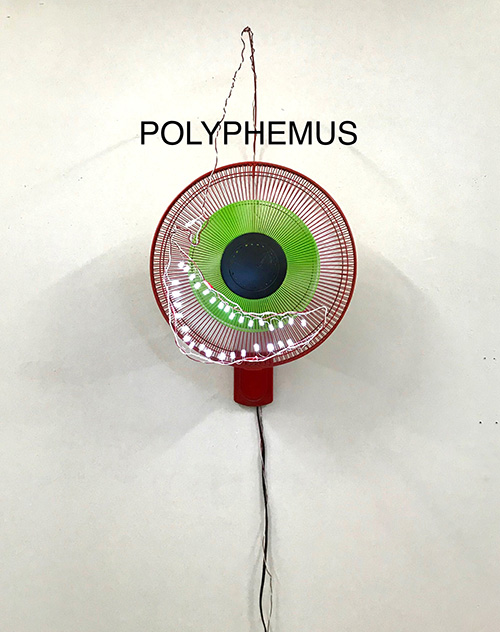 Polyphemus , will be presented at Goucher College’s Silber Art Gallery in the Sanford J. Ungar Athenaeum from September 18 to November 30, 2020.

Ajay Kurian is a Baltimore-born, New York-based, conceptual artist working in sculpture, painting, and installation. His invitation to Goucher as the Nancy G. Unobskey ’60 Visiting Artist in Modern and Contemporary Art occasioned his solo exhibition of new work envisioned for and presented in the college’s Silber Gallery.

Kurian’s exhibition, installed to resemble a clandestine beer hall meeting, depicts cycloptic figures that possess power and status, populating a table in an ambiguous, social grouping. Atop easy postures and snappy outfits, their heads are each made up of a watchful, rotating eye and an illuminated smile. Above, a disembodied set of mechanized eyes monitors the scene, part security camera, part dystopian nightmare. Within this space all are observed, and all are observing. There is a symbiotic relationship between the platform and participants in which those who have gotten through the gates become gatekeepers—this club polices itself.

Kurian’s exhibition title, Polyphemus, comes from the cyclops in Homer’s Odyssey—a character who serves as a stand-in alternately for narrow-minded nationalism or the “barbarian other.” The figures that stand out as different within this grouping are in servitude or on the wall as decoration. The two outlying figures are a frog and a monkey that appear to caricature non-white racial identities and point to inequity, oppression, and abusive behaviors that lurk within the upper echelons of polite society.

Art is often misunderstood to be neutral, apolitical, and inoffensive. Both as an area of study and consumed in museums and galleries, art is perceived as a progressive field. It is assumed that art grants freedom to the practitioners and accepts benevolence from institutions and patrons. For viewers without the references to see the hints of art world personalities, the setting mimics daily behavior and elicits a broader read. Many institutions are doing the work of reevaluating and discussing their oppressive histories. Goucher College has begun its own inquiry with hands-on research opportunities in the Hallowed Ground Project, which acknowledges the “history of slavery and racism in the land the college currently occupies.” Kurian’s work exhibited in this setting contributes to the broader sense of institutional self-evaluation and critique. His work mingles personal experience and tangential narrative with probing questions; it is embodied in the space of discomfort that comes from a hard look at ugly truths and our own (witting or unwitting) involvement.

While Kurian made the majority of the works before the new reality of a pandemic-inflicted world, this show takes on an unforeseen anxiety in these unprecedented and precarious times. Set against the travel restrictions of virus containment, an impending election, social unrest, and calls for a restructuring of racist institutions, Polyphemus takes on a new layer of eeriness in the apparent stagnation and complacency of its depicted in-crowd. Our inability to gather, including for in-person education, casts this scene as all the more illicit and foreboding.

Kurian is the seventh artist invited to present a public lecture as the annual Nancy G. Unobskey Visiting Artist in Modern and Contemporary Art. This annual series brings internationally renowned artists to Goucher’s campus to work with students in studio visits, in-class workshops, and a public lecture. Kurian is known for his interdisciplinary practice and work that challenges our acceptance of norms, systems of belief, and aspirational mythologies. His work has been exhibited around the world, notably in the 2017 Whitney Biennial, 47 Canal, White Flag, Sies + Hoke, JOAN and Rowhouse Project, and Von Ammon Co. Goucher is thrilled to host the artist’s virtual, public artist talk in early October.