Goucher College was honored for its student voter engagement at the 2019 ALL IN Challenge Awards Ceremony, which recognizes colleges and universities committed to increasing college student voting rates. 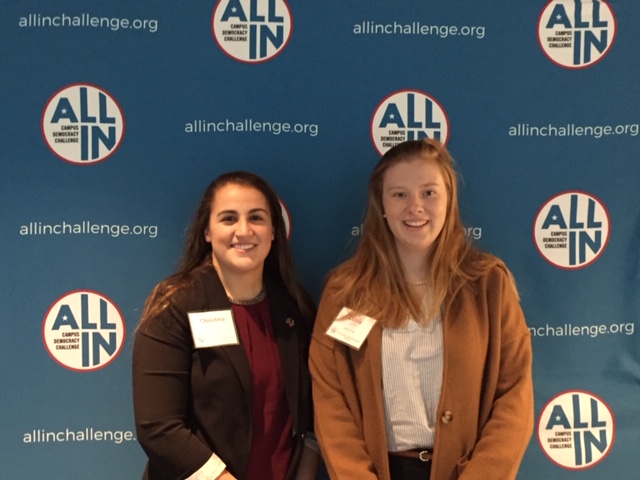 Goucher received a gold seal for achieving a student voter engagement rate between 40% and 49%.

“A liberal arts education prepares students to be engaged citizens in their communities,” says Nina Kasniunas, associate professor in political science at Goucher College. “At Goucher, faculty and staff are focused on educating and supporting students in finding their voices and agency. The lessons students learn inside and outside of the classroom help them realize their potential as change agents. Such agency is realized each election cycle as a team of students take on the important work of ensuring all Goucher students who are eligible are registered to vote and have access to the ballot.”

Student participation in elections has increased from the 2014 midterm election to the recent 2018 midterm election. According to the National Study of Learning, Voting, and Engagement, an initiative of Tufts University’s Institute for Democracy & Higher Education, voter turnout at the more than 1,000 institutions participating in the study increased by 21 points from 19% to 40%.

“Goucher’s high voter turnout rates reflect the high level of democratic engagement of the student body and are a strong indicator that our students will continue to be engaged citizens long after they graduate,” says Kasniunas.

Christina Charikofsky ’21 and Claire Corliss ’21, who have been active in Goucher’s Voter Mobilization Team, joined Kasniunas for the awards ceremony that took place in Washington, DC, on November 12, 2019.

The ALL IN Campus Democracy Challenge is a nonpartisan, national initiative recognizing and supporting campuses as they work to increase nonpartisan democratic engagement and full student voter participation. The challenge encourages higher education institutions to help students form the habits of active and informed citizenship, and make democratic participation a core value on their campus.

More than 560 campuses, enrolling more than 6.2 million students, have joined the challenge since its launch in summer 2016.