Professor of Mathematics and Computer Science 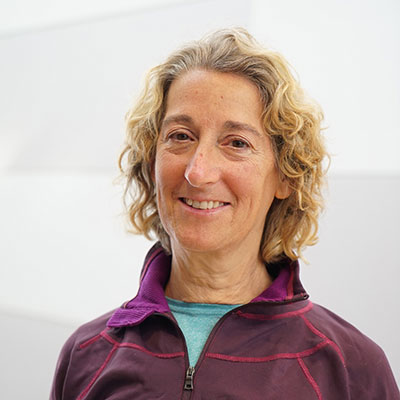 Jill Zimmerman, James M. Beall professor of mathematics and computer science, has taught at Goucher since 1990 and has run its robotics lab since 2006. She introduced a new course in software development recently, and her paper describing a hybrid computer language that combines two popular programming paradigms was published last October in Computer Languages, Systems, and Structures. Here, she discusses what she and Bill Gates have in common and reveals her master plan to take over Hoffberger Science Building with an army of robots.

What sparked your interest in computer science?

In 1975—before Jobs and Wozniak were working in the garage, before Microsoft was founded—there was an article in Popular Electronics that described how hobbyists could build their own computers. I was in high school, and my father and I did that. It had all of 4K of memory. Apparently that same article inspired Bill Gates. That’s what started Microsoft.

I use a lot of collaborative learning. The students work in small groups and design their own multiplayer virtual worlds. Students have to design, critique, redesign, implement, and produce a final product. It will take the full semester. The students have the ability to add all kinds of embellishments to their own design. My favorite part is when students take the knowledge that they’ve accumulated and actually synthesize it into some computing artifact that’s their own.

Is it hard to keep up with changing technology?

You really have to be a lifelong learner. I constantly have to make sure that I’m learning what’s going on and updating the curriculum so that it reflects the changes. I love that challenge.

You have three robots in the robotics lab. What are they like?

Our first robot is a used industrial robot. He has five joints: a wrist that both rotates and bends, elbow, shoulder, and base. His name is Armand because he’s an arm. We made him an optical sensor and a device where we can drop a pen [into his hand], so he can both see and write. We taught him how to play tic-tac-toe. We’ve got a student working on an algorithm that can be used for intelligent gameplay, so hopefully by the end of the semester he’ll be unbeatable.

What about the other robots?

Otto and Anna. They’re basically Roombas without the vacuum. We have given them both new controllers, and Otto’s got a camera and a sonic-range finder. I’d like Anna to use her laser-range finder to map out the space and communicate with Otto. I’d like them to cooperate on this task and do things together. That is my goal. I think people think I’m using this for peaceful purposes, but I’m really planning for my robotic army to take over Hoffberger.

I refuse to be pigeonholed.